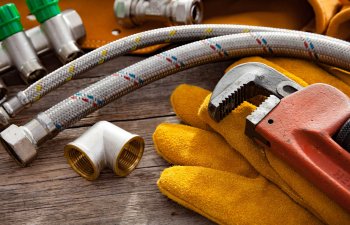 Between the years 1978 and mid-1995, polybutylene was the “standard” material used for piping in home plumbing systems. The material was cost-effective, moldable into many shapes, readily available, and easy to install. However, over time, polybutylene pipes were causing significant problems in homes throughout the United States. They were rupturing without warning and causing extreme property damage. A Class Action settlement of $1 billion in 1995 made these pipes no longer acceptable by U.S. building codes, so production was ceased on polybutylene piping. While new homes after 1995 were no longer constructed with polybutylene pipes, millions of homes were left that had piping throughout their homes made from polybutylene plastic.

As with anywhere, finding a home in a well-established community often means that you will be limited to purchasing an older home. There is much appeal for many people in buying an older home: it has character, the lots are typically larger, and for the DIY-ers, it provides plenty of opportunity for fun home projects. However, the downside of buying a home built between 1978-1995 is that it may have polybutylene piping.

Absolute Best Plumbing specializes in removing old polybutylene pipes and replacing them with pipes constructed from Polyethylene, CPVC, or other materials. While you may not want to replace an older home’s entire piping system, it is much easier done before you move in than it is to clean up after a massive water leak that damages much of your personal property.

The most distressing thing about polybutylene piping is that they typically fail without warning. Polybutylene pipes are infamous for corroding from the inside out, so all signs of damage are hidden until the pipes burst. Today, many homeowners are forced to replace polybutylene pipes to prevent water damage and protect their home’s property values.

If you need polybutylene pipe replacement services, contact Absolute Best Plumbing today. Our goal is to replace your pipes as quickly and cost-effectively as possible so that it causes the least amount of disruption to your home.

If you are in need of plumbing services for your home or business in Orlando or in central Florida, please contact our Plumbing Company or call Absolute Best Plumbing today at (407) 930-7309. We look forward to handling all of your residential and commercial plumbing needs.